Warning: Use of undefined constant REQUEST_URI - assumed 'REQUEST_URI' (this will throw an Error in a future version of PHP) in /homepages/35/d369277907/htdocs/clickandbuilds/ExploreMySriLanka/wp-content/themes/sparkling/functions.php on line 73
 Sri Dalada Maligawa – Temple of the Tooth | Explore My Sri Lanka Skip to main content 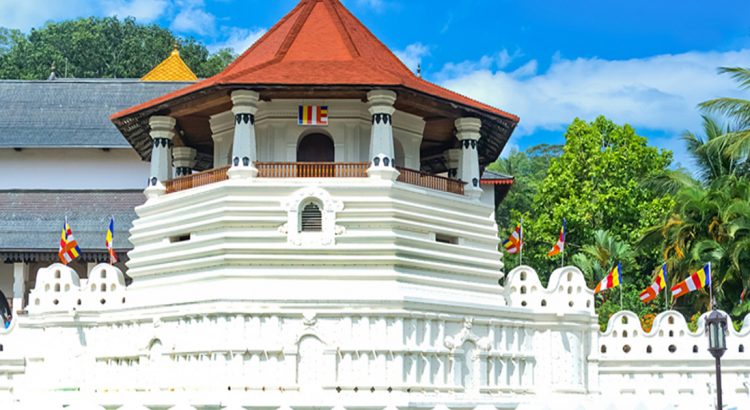 The Temple of the Tooth Relic, also known as Sri Dalada Maligawa, is Sri Lanka’s most important Buddhist shrine. It is believed to hold the sacred tooth of the Buddha, which was taken from his remains after his cremation in India and smuggled to Sri Lanka, where it eventually ended up in Kandy. There, a temple was built within the royal palace complex to keep it safe. Both Kandy and the temple (as it is in it) are now listed as UNESCO World Heritage Sites.

The sacred tooth of the Buddhais is kept in the smallest of seven nested golden caskets shaped like a stupa or dagoba, that are kept in an inner shrine inside the temple.

The sacred tooth relic used to leave the temple once a year, during Esala Perahera. It would then go on a 10-day parade with torches, dancers, drummers and elephants. It is now one of the better-known festivals in Asia, and it may be the largest Buddhist celebration in the world.

As many as 100 elephants, dressed in elaborate finery, make their way into town while torches and fire dancers fend off curses. Whip-cracking porters clear the way through the throngs of pilgrims, followed by musicians, jugglers, torch bearers, boy dancers and acrobats, and members of noble families in Ceylonese garb. On the last night, the procession moves from the city to the temple, led by elders in the costumes of the ancient kings of Kandy and lit by handheld candles. The procession flows into the temple compound to encircle the shrine, following the route of the sun in its course across the skies.

Attendance at the Esala Perahera numbers at about a million people. The festival brings today all ranks of Sri Lankan society in a vast throng of devotees and interested onlookers. Because of the national character of the shrine, many Tamil Hindus and mixed-blood Christians take part as an expression of their common cultural heritage. At the festival, the president and leaders of Sri Lanka continue the nationalist Buddhist tradition by taking part in a ceremony in which they dedicate their service to the people in the presence of the sacred relic.

Things you should know when visiting Temple of the Tooth (dress code):

You should take your shoes off and leave them in the shoeroom (a.k.a. cloakroom for shoes).
Wear long loose trousers or a long skirt that covers your legs.
Make sure your shoulders and cleavage are covered.
It’s best not to wear black or other fully dark clothing.
Source: http://wonderfulwanderings.com/temple-of-the-tooth-relic-kandy-sri-lanka/, http://www.sacred-destinations.com/sri-lanka/kandy-temple-of-the-tooth